Performance, Sound, Gesture, and his Approach to Teaching 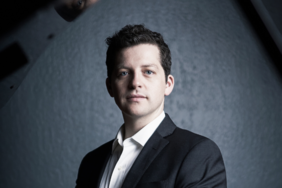 Henry Kramer graduated from the Juilliard School, where he worked with Julian Martin and Robert McDonald. He received the Doctor of Musical Arts degree from the Yale School of Music under the guidance of Boris Berman. Kramer is a multiple international prize winner, notably First Prize at the Montreal International Competition in 2011 and Second Prize at the Queen Elisabeth Competition in Brussels in 2016 (with others in between). More recently, he was awarded a 2019 Avery Fisher Career Grant by the Lincoln Center—one of the most coveted honours bestowed on young American soloists. A brilliant soloist, a much sought-after chamber music collaborator and recording artist, teaching also ranks among Kramer’s greatest joys. He joins the Faculté de musique de l’Université de Montréal in the upcoming academic year.

I am really excited about this move, and I’ve always loved Montreal. The first time I came was for the Competition in 2011, and I fell in love with the city then.

I will answer this question specifically from a work perspective, because the city’s cultural aspects are all self-explanatory. Specifically about the Faculté de musique de l’Université de Montréal, I am really excited to work with the students, who for me, when I came to interview, were indicative of a very high artistic level. The facility is beautiful, and I already appreciate my colleagues, the ones that I’ve met. They’ve been really welcoming.

Montreal is very unique in that you have this European-type city in North America and in comparison to other cities, including in Canada, there are many differences, so I’m really looking forward to the kind of artistic qualities that this might implicate, and also, culturally, the way of life, what I can learn in this new place, with this different sensibility than the one I grew up with.

I would start with my teachers, at Juilliard, and people with whom I worked at various festivals: Julian Martin, Robert MacDonald, Boris Berman, and then Leon Fleisher, Miriam Fried, Claude Franck; working with them had a huge influence on me. In some ways, I feel as if these mentors gave me permission to trust myself.

The Queen Elisabeth Competition was a big turning point for me, as well as receiving the Avery Fischer Career Grant, and the concerts that ensued from that. Obtaining my doctorate was another accomplishment that made me feel like I was going forward.

Artistically, my love of chamber music also influences my outlook, playing with the violinist Isabelle Faust, for example. And orchestral music: I am a great fan of Yannick Nézet-Séguin and hope to meet him in Montreal too! And then, there are the pianists: when it comes to recordings, I am interested in the old recordings, for example Michelangeli, Ingrid Haebler, and that generation. My grandmother had the Phillips Great Pianists collections—all remastered historical recordings. From my earliest years, that sound was in my ear, and it is something I would encourage in my students. I have noticed that with the younger generation, the first five results on YouTube tend to become a reference, and Spotify is terrible at organizing such things, it’s quite a challenge!

In my teaching, I have been influenced through my students, too. You learn more about yourself when you need to find a bridge to connect with someone about what you hold to be important. Many people have different ways of connecting, of finding ways to connect with their soul, with what makes them tick. Teaching has really opened up doors for me, has revealed to me how I think about music, in a way that is ever more multifaceted, because it’s refracted through all these different people who are finding their way with music. In the end, my relationships with all these individuals influenced me.

For me, in my teaching, it is really central to use the musical text—of course, all the information we know, historically—but specifically the text, to connect the music to gesture. Gesture is a way to convey narrative, and to convey different ways of experiencing the world through music. For me, that connects specifically to the body.

Before I played the piano, I danced, when I was a kid, and that has influenced how I approach the instrument, because my impulse is to think: where is that sound, in my body? For a singer, for instance, almost everything generative happens internally. There’s a lot about singing that consists of imagining how a pitch is “placed” in the body, where it resonates. I try to translate that to the piano: where the arm is, as a bow, for instance, and how a bow can be an analogy for breath, much like the fingertip is the point of articulation for speaking. The centre of the body is the generative impetus behind every intent at the instrument. Therefore, when we talk about technique, in my opinion, it is connected to something very fundamental about the text and about what we want to communicate through sound, as generated by gesture.

Once you have this physical understanding, you can play a piece because you feel every moment. And every concert hall, every acoustic requires different communication through sound, through the body, and the more we understand that, the more guidance we have to work with.

Another huge influence for me is playing a great deal of chamber music, with other instrumentalists and with singers. The piano can just be this kind of “white sound” onto which one has to impose abstracted ideas, while the violin, for example, is so specific. In the same way, the cello sound is so specific, and you look for these sounds in an orchestra or chamber group. But with the piano, it is as if we need to find a way to be a conjurer of sounds, to make the instrument something it might not seem to be, and part of my teaching is to imagine something for the piano that it may not appear to be. In other words, it is not enough for the piano to just “be” a piano: is it a stringed instrument? Is it a singer? What kind of singer? This is a big part of my teaching: embodied performing and conjuring sound. I think we all know when a sound activates, as opposed to when it’s just kind of “there.” That immediate connection, where everybody understands you from the sound, right away, comes to me refracted through Julian Martin, through his teacher Fleischer, who I also had the chance to work with briefly. But the way he talks about it is to use physicality to optimize the sound, to create that straight line from intention to the actual sound that we hear. I think about that very much, about that concept.

But I also think we must be flexible with ideals in these modern times. It is important to question anything that we think is true. We should encourage students to find something honest in their sound, to play in an embodied way, to find the text of the music primarily through sound and through gesture.

Would you extend this approach to all the components of sound, for example acoustics as opposed to the digital reproduction of sound, as well as the physicality and materiality of sound?

Absolutely, totally. That is where the value of continuing this art form resides. Digitized sound is one thing, but when you go to a concert, it’s not just about what you hear, it’s about feeling that is transferred to you through the instrument, through the artist and from the artist. There is something about that experience, together in the hall, of being in the same vibration. In being, so to speak, “according to” the music can really be one of the only things that truly, if we submit to it, brings us together, connects us with something essential. Maybe, in this world today there are very few experiences that offer that, and people are hungry for it.

All these students wanting to embark on this journey, that makes me feel proud to be learning alongside them and guiding them with these experiences. It will always remain an amazing opportunity!