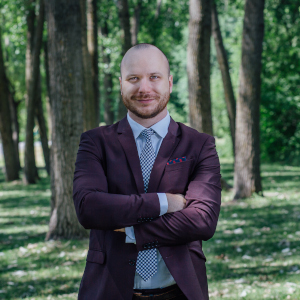 A get-together with Xavier Roy, holder of a bachelor’s degree in performance (classical singing, 2013) from the Université de Montréal Faculty of Music and general manager of Festival de Lanaudière.

I’m an unfrocked classical singer now general manager of Festival de Lanaudière. I did a bachelor’s in performance (classical singing) from 2009 to 2013, and my stay at the Faculty changed my life. I made friends there and exceptional colleagues, in addition to enjoying memorable musical moments. Although I’m no longer a professional musician, I use what I learned at the Faculty on an almost daily basis, especially when I sing for my two daughters!

The personalized monitoring I benefited from thanks to the teachers in classical singing and the very special contact I had with them. As a student you don’t feel like just a number at the Faculty of Music: teachers know all their students personally. You can ask them for advice for all sorts of reasons, whether they have to do with music, with a musician’s career or with balance in your personal life. Also, in light of the very human cohort size, students benefit from a great number of interesting opportunities, and do so from the very beginning of their studies. In my own case, I had the chance to take part in an Atelier d’opéra production as a soloist in my first year as a bachelor’s student, which was a remarkable experience!

Despite my specialization in classical singing, it was the course in Musician’s vocation, with the incomparable Robert Leroux, that left the deepest mark on my journey. Quite early in my bachelor’s in classical singing I started to take an interest in arts management. When I saw Robert Leroux standing on a chair and exhorting us like a preacher to manage our musical practice like entrepreneurs, the message resonated really deeply inside me! Today, Robert’s not only a mentor, but also a friend.

I learned to sing at the Faculty, but I also developed a taste for arts management from my very first day. After a game of musical improvisation, a new classmate, Louis Alexandre Beauchemin, invited me to join his vocal group. A few months later, with two more associates we announced the creation of the group QW4RTZ, with which I went on to give hundreds of concerts over four years. After leaving the group in 2013 I specialized in cultural management, especially in marketing at Opéra de Montréal and in digital transformation at Place des Arts. I had the privilege of studying management at HEC Montréal and at the University of Oxford, where I finished an MBA. I was recently appointed general manager of Festival de Lanaudière, the largest classical-music festival in Canada.

The student strike in 2012 is probably the most powerful memory I’ve kept of the Faculty. At the time I was on tour with QW4RTZ a lot and couldn’t play as much of a role as I would have liked in student politics. I remember rehearsing at the Faculty, when classes were suspended. The excitement was palpable. I’m convinced that musicians have to constantly question themselves about the role they play in the social fabric of their town, their province, their country.

It was incidentally at that moment that Nicolas Ellis, whom I’d met in Robert Leroux’s class, and a number of musicians from all the music faculties in Montreal founded a socially committed orchestra. A few months after the strike I suggested to Nicolas that I be involved in the ensemble, which had become Orchestre de l’Agora. As chairman of the board from 2014 to 2019, I experienced some of the most stimulating moments of my (young) career as a manager. Since its founding, Orchestre de l’Agora has turned over hundreds of thousands of dollars to young professional artists and to community organizations they seek to be involved with. Which just goes to show, you never know what encounters in classrooms may lead to!

Back to full list of portraits
Previous portrait Next portrait