The Partnership-based study on music mediation (EPM2) falls within a global context where cultural mediation is considered one of the foundations of the redefinition of educational, cultural and diversity policies. Through the mobilization of investigators and professionals, the aim of the EPM2 partnership-based project on the role of the teaching and practice of music mediation in the contemporary reconfiguration of the music profession is to:

This innovative project builds on a pooling of the strengths of teachers, of investigators, and of students from Cegeps through university who work in close collaboration with the professional music community (broadcasters, producers, musicians). The team constituted in this way allows for an interdisciplinary approach that combines musicology, cultural history, sociology of culture, cultural management and arts marketing, cultural mediation, music education and social intervention.

The partners in the project: 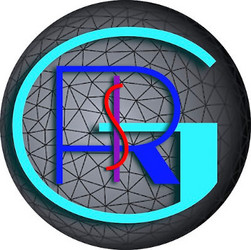 This project embodies a balanced combination of the development of computer tools and the multidimensional creation of immersive musics. The design of original and innovative tools, integrated into composition software, allows immersive musics to be created in a real-life setting, in adapted studios and performance areas. The tools developed by the Research group in spatial immersion are open source, therefore available free of charge so that they can be modified and redistributed to the community. This practice fosters creation and collaboration at the international level, as well as the circulation of musics.

The creation and development perspective adopted by the GRIS is based on the fact that, on the one hand, composers for the most part are using audio sequencers to create their music; and secondly on the premise that management of the space needs to be integrated into the composition process as an autonomous parameter, not carried out only at the end of the process itself.

Music in the service of power, between propaganda and diplomacy: from the Third Reich to the end of the Cold War 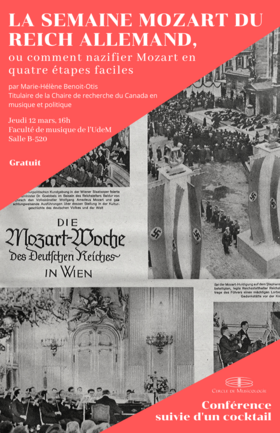 This research project has two closely linked aims. It involves, on the one hand, shining a light on the variable – and sometimes diametrically opposed – political claims that can be applied to the same musical repertoire based on a changing sociopolitical landscape, and it does so by means of a case study that aims to show how the image and the music of the great composers in the musical canon (Bach, Mozart, Beethoven, Brahms, Liszt, Wagner, and so on) were appropriated for political purposes during the Third Reich and the years that followed the Second World War. On the other hand and in a broader perspective, this project aims to (re)consider the distinction between musical propaganda and musical diplomacy, two categories that are generally used without a clear definition, and sometimes even interchangeably.

This research project on the musical press in France between 1890 and 1940 is one of the principal projects of the Équipe de recherche sur la musique française. Its aim is to:

The musical press in France (1890-1940): discourse and ideologies relies on an important website with many resources, including a databank containing several thousand press articles.

The trajectory of the Debussy movement (1895-1923): style, reception, institutional implantation

This project focuses on a musical movement influenced by Debussy and which the scientific literature has almost completely neglected. Specifically, this undertaking will concern itself with defining the scope of the trend in question by identifying the composers associated with it, whether they openly professed to, or whether they were designated as such in the press (Bardac, Büsser, Inghelbrecht, Ravel, et al.). Then, we will endeavor to measure the force and the depth of the impact this movement had by looking at it from three principle perspectives:

This research will lead to among other matters a reconsideration of the career and music of Maurice Ravel, one of the most famous representatives of the Debussy trend, in order to position them within the movement.

Alfred Laliberté, Rodolphe Mathieu and Auguste Descarries, three figures in Montréal’s musical avant-garde in the years 1920-1950, maintained significant ties with three Russian composers active in Europe and the United States (Scriabin, Rachmaninov and Medtner). Those exchanges called into question a prejudice according to which Québec in the Duplessis years was a cultural desert cut off from international creation. To encourage a reappropriation of that musical and historical heritage with a broad audience, this project proposes producing a video that combines a documentary and recordings of piano works that illustrate the exchanges of the six Montréal and Russian composers cited.

The Équipe de recherche sur la musique française (ÉMF) whose program is entitled Music in France 1870-1950: discourse and ideologies, brings together 12 regular investigators and a dozen collaborators the list of which varies from project to project, but is characterized by its internationalism.

The themes addressed in the framework of this program allow for:

These areas of research contribute to establishing new paradigms: tradition as modernity (in resistance to economic and technical modernity) through the study of the nuances in the discourse of the period on music and through a study of sources. What is involved is designing a history of music that takes account of tradition as much as modernity in a reevaluation of the impact of works in the constitution of an artistic heritage.

The scientific programming of the ÉMF supplies a series of seminars that entail study days, colloquia and publications. The ÉMF welcomes students from all levels of study and postdoctoral fellows who participate in most projects and contribute actively to scientific activities.

Towards an esthetic of the sinusoidal wave

The sinusoidal wave is at the foundation of all audible sounds. Intimately linked to the birth of electronic music in the 1950s, it has nevertheless received little study as an esthetic object. The first section of this project is built around an online survey, a review of artistic and scientific literature and the inventory of works in which the fundamental element is the sinusoidal wave. The principles articulated in the discussions on the sinusoidal wave will then serve to guide the study of the creative processes. The second section intends to unite research and research-creation by proposing to artists that they create works based on the sinusoidal wave while providing access to the results of the studies in progress. The artists will also be invited to produce a text explaining their processes in order to enrich knowledge about the different creation approaches with regard to the sinusoidal wave and to maintain artistic discourse at the center of the project.

Towards a history and a transcultural theory of heterophony

This research project focuses on the musical texture that consists in simultaneous variations on a single melodic material. This principal of writing can be found in a large number of music cultures around the world. Towards a history and a transcultural theory of heterophony aims to evaluate the heuristic value of an ensemble of techniques, rules, tropes and behaviors associated with heterophony applied to composition, performance and improvisation. The musical corpus is drawn from a broad range of cultures, regions and historical periods.

The goal of this project is to produce a history, on a sociomusicological foundation, of concert audiences in Paris during the Third Republic. It involves:

By way of this project we hope to develop an approach that combines audience history and sociology with a view to understanding not only the social characteristics of audiences but how they are constituted and their importance for institutions in the context of a “commodification” of the concert seat combined with a movement towards democratization of culture that would continue throughout the 20th century.