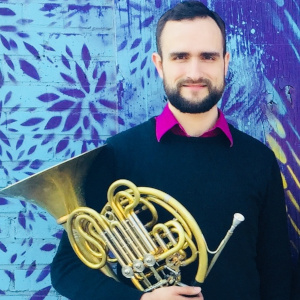 A get-together with Gabriel Trottier, doctoral student in performance (horn) at the Université de Montréal Faculty of Music.

I’m a horn player whose loves sharing the traditions of the instrument while at the same time pushing its boundaries in order to fuel avant-garde esthetics. After a bachelor’s and a DESS in performance at the Université de Montréal Faculty of Music, I took myself off to Europe for four years.

First I studied at the Norwegian Academy of Music in Oslo with Julius Pranevicus and Frøydis Ree Wekre. Next, I filled the position for a little less than a year as fulltime horn player with the French wind quintet Le Concert impromptu. Finally, I received a scholarship for the contemporary-music specialization program of the Internationale Ensemble Modern Akademie in Frankfurt am Main, Germany, where I was supervised for a year by Saar Berger and the members of Ensemble Modern. Back in Canada since 2018, I’ll be winding up my doctorate in performance before too long.

In 2017 I was invited to give a recital at the Kunsten Museum of Modern Art Aalborg in Denmark. The program had to be made up exclusively of contemporary works for solo horn and contain at least two premieres. I told myself that this professional opportunity could turn into the starting point for academic reflections. In the framework of my doctorate I’m doing an in-depth exploration of 20th- and 21st-century music for horn.

To guide me in the process, I chose two Faculty of Music professors: horn player Louis-Philippe Marsolais for his versatility, and musicologist Jonathan Goldman for his analytical and theoretical skills.

I think my interest in living music is largely related to the positive and artistically enriching experiences I’ve had with conductor Lorraine Vaillancourt, whom I met at the start of my bachelor’s. That was followed by numerous collaborations with the Atelier de musique contemporaine (today the Ensemble de musique contemporaine) and the Nouvel Ensemble Moderne.

After winning third prize in the Orchestre de l’Université de Montréal’s concerto competition, I got the chance to take part as soloist in the “Étoiles montantes” (Rising Stars) concert in November 2019. I performed a piece that’s rarely played, Krzysztof Penderecki’s Concerto for Horn and Orchestra, “Winterreise.” That concert is definitely a memorable moment in my academic career at the Faculty.

Try as many different projects as possible before focusing on a more defined artistic vision. That’s the best way, in my opinion, to build an open-mindedness and a musical personality, and then eventually find an artistic direction you really feel like serving.

In terms of instrumental technique, there are two that come to mind. The first is the performance in concert of the work Messages for the Late Miss R. V. Troussova by Hungarian composer György Kurtág at the Lucerne Culture and Congress Centre under the direction of Heinz Holliger. The second is when I played all in the same program, at the Kölner Philharmonie (Cologne), György Ligeti’s Trio for Violin, Horn and Piano, Brian Ferneyhough’s Flurries and Vito Žuraj’s Contour.

And the zaniest thing artistically is without a doubt the interdisciplinary music-theater project Land (Stadt Fluss) by filmmaker Daniel Kötter and composer Hannes Seidl. We slept three days on a farm in order to film a single take of five consecutive hours without a break with musical interventions. For performances, the film was screened accompanied by multisensorial interventions and a book the audience could consult at any time. Incidentally, you can watch a performance here.

I hope to help composers develop their ideals by creating and performing marginal works. At the same time I’m going to continue to prepare orchestra auditions to refine my playing and improve my knowledge of the traditional repertoire. But first and foremost comes preparation for my doctoral recital, which will consist of mixed music works for horn and real-time processing. I also want to carry on being involved in teaching the horn and in participating as a performer in developing a varied and colorful cultural landscape.

Back to full list of portraits
Previous portrait Next portrait