Salle Claude-Champagne is the Université de Montréal Faculty of Music’s most important performance venue. It is also a space fitted with leading-edge research equipment. 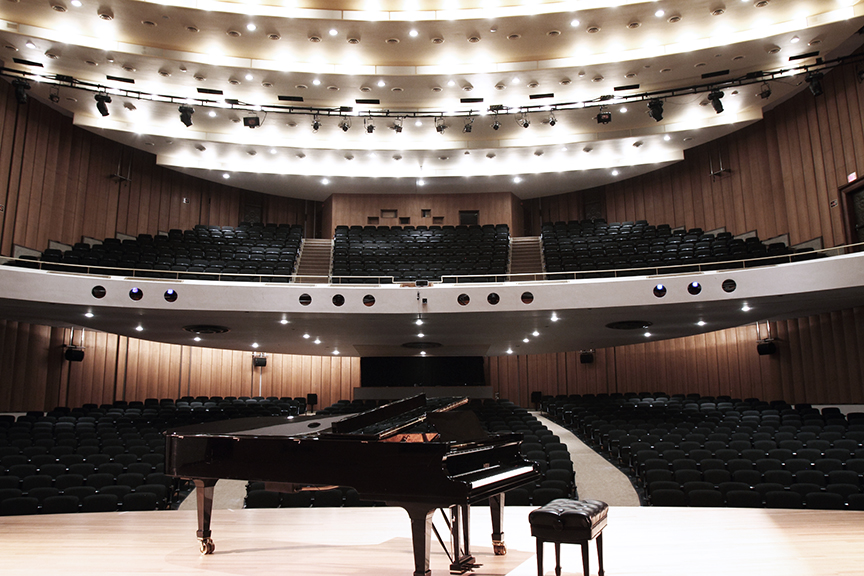 Recognized as one of the few concert halls of this size in Québec dedicated exclusively to music, whether for large ensembles or for recitals, Salle Claude-Champagne has enjoyed a rich tradition and remains a reference to this day for the excellence of its acoustics.

Over 150 concerts and public events are staged there every year, by the Faculty of Music but also by cultural organizations, acclaimed artists and other educational institutions.

Among the artists and organizations that have performed at Salle Claude-Champagne may be noted:

In 2016, thanks to a grant from the Canada Foundation for Innovation (CFI) obtained in collaboration with the Centre for Interdisciplinary Research in Music Media and Technology (CIRMMT), the hall was enriched with state-of-the-art equipment. Acoustic devices, data collection and analysis tools, studios and a control booth open the door to innovative research, particularly in performance and acoustics.

Since its inauguration, on November 20, 1964, Salle Claude-Champagne has contributed considerably to the development and awareness of music in Québec, whether through concerts or recordings.

Built in the 1960s at the request of the Congregation of the Sisters of the Holy Names of Jesus and Mary for what was known as concert music, the hall at the time was meant to serve the teaching activities and concerts of the École de musique Vincent-d’Indy, which had its home until the early 1980s in the current Faculty of Music pavilion.

Quickly, Salle Claude-Champagne’s outstanding sound quality helped it establish a prominent name for itself. The Montreal International Music Competition, the presentation of a number of Expo 67 shows and, above all, the series of recordings for Les Grands Concerts on Radio-Canada contributed significantly to the sterling reputation it earned.

Who was Claude Champagne?

An influential musician, a respected administrator, a sought-after teacher and an eminent composer, Claude Champagne is considered the father of Canadian music. The works he is known for include the Suite canadienne (1927), the Symphonie gaspésienne (1945) – which he conducted in Brazil, among other places, in 1946 – and Altitude (1959).

As assistant director of the new Conservatoire de musique du Québec in Montréal, he played a decisive role in training composers like Violet Archer, Maurice Dela, Clermont Pépin and François Morel. His influence extended to elementary schools, for which he designed sight reading exercise books, to McGill University and to a number of private music schools.

Université de Montréal awarded him an honorary doctorate in 1946. A number of distinctions, films and a “Claude Champagne year,” held in 1964, additionally paid tribute to his talent and his inestimable contribution to the musical life of the country.